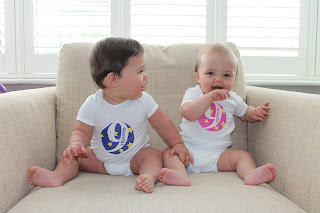 9 months came as we were in (very) hot and sunny Palm Springs so after a week of trying to get everyone over their jet lag and back onto UK time, I finally got around to the babies' 9 month pictures taken with our new camera which I need a lot more practise with. I have to say, Evan's really capture him but Sienna's don't look as much like her although it could be down to the fact that for that first week we were all living on very broken and irregular sleep. Whilst we were away both babies mastered sitting up on their own although Evan can sit for longer before toppling over then Sienna can. The babies have also started showing a serious interest in getting around, at the moment only dragging themselves around in a circle although Sienna can go forwards a bit. Strangely I don't dread them crawling, I suppose if anything it makes me realise we've come to another milestone and time is moving too fast. 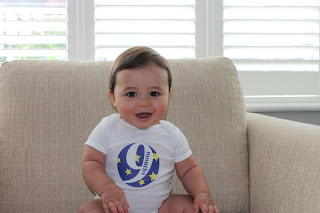 Sienna is saying a lot of da-da-da, Evan is more ba-ba-ba so it looks like I'm 0 and 3 in terms of Mama being the kids' first word. Evan is the more picky of the two, making some classic faces of disgust when anything with even the slightest hint of texture passes his lips. Both babies did amazing on our long haul flight over although the flight back was a different story, Evan screamed most of the way back which got us quite a few glares as people left the plane and made me reconsider our next US visit. 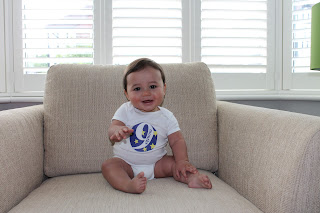 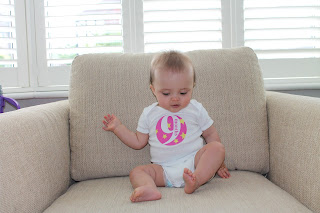 So, April 24th has come and gone and my little boy is now 3. As the day approached I felt a little trepidation thinking about how fast he was growing up, but we had a great time celebrating at his party and on his actual birthday. In the days since his birthday I can't even tell you how many times I've thought to myself just how grown up he is; it's amazing how well he can communicate now, how independent he's become and how much more emotionally aware he is. I thought I would be sad to see another year go but I'm actually looking forward to seeing more of the little person he's becoming and hopefully saying goodbye to those tantrums (and eventually diapers at night, too!).

﻿﻿Calum and his friend Maggie celebrated together at a joint party at McDonald's. I can't remember ever attending a McDonald's party back home but they seem to be the done thing here and in the end it was the perfect choice as the kids seemed to have loads of fun and we didn't have to clean up after which was ideal since I was exhausted-even though it was only 2 hours there were something like 13 3 year olds and their parents there and it was manic. I suppose the fact that I baked and frosted 6 dozen cupcakes the night before didn't exactly help, either! ﻿﻿
﻿
﻿﻿On Calum's birthday we decided to leave the babies with a sitter and take Calum to a big theme park about an hour away called Chessington (I guess it's probably like a Knotts farm or similar). God, life is easy with one kid! Was so nice to only have the one little umbrella stroller (which now that Calum is 3 apparently he will no longer sit in) and to spend time just focusing on him and watching him take in all the rides, animals and the aquarium. 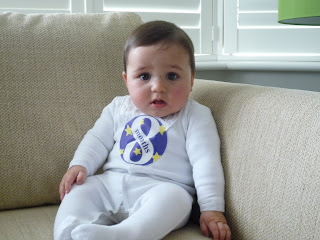 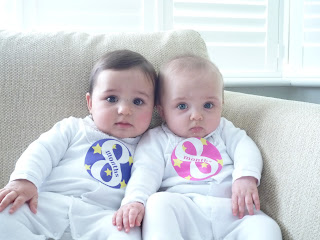 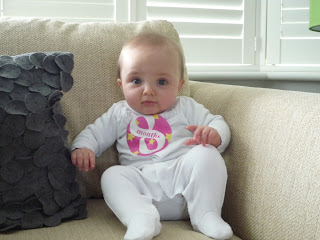 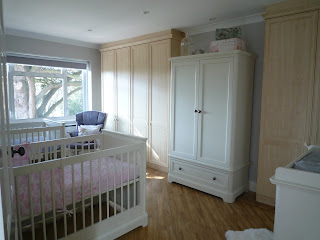 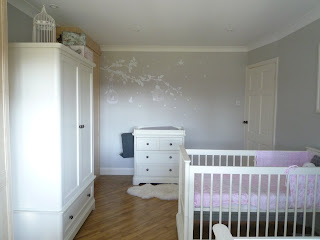 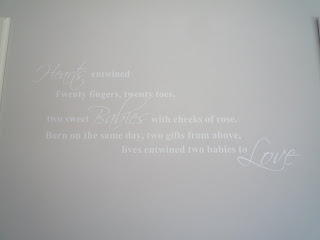 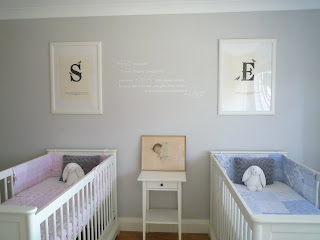 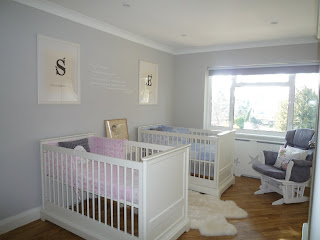 As of a few weeks ago, this is where both babies finally call home (after Sienna making a delayed move due to her frequent night waking). Looking at these pictures, I can hardly remember what the room looked like when it was Calum's. When we found out we were having twins we went out and bought a matching cot (crib) to Calum's old one and after toying around with a grey and yellow combo, decided in the end to stick with grey and do pink and blue accents since the selection of baby bedding here is leaps and bounds behind what you guys have back home and all we could find that we liked was pink and blue. Otherwise we found some bird pieces-the two birds on the wardrobe, the pillow on the nursing chair and the knobs on the built in wardrobes (which we were going to paint but I keep telling Mark surely that pale wood will come back in one of these days and we might regret it...) and that was that.

The most meaningful piece in the room was sent to us by my Aunt Lorie and Uncle Ken this Christmas. It's the picture of the baby on the small table and the second I opened it, it took me back to my Grandma Britton's house, it hung in the room I slept in as a child and was bought for my Grandma by her mother when my Mom was born in the 1950s. My Mom was born premature like my babies and my great-grandmother told my Grandma she thought the baby looked like her when she was born. It was such a thoughtful gift and so special to have a piece of my history and my family here in our house which is so far from "home".

I was hesitant about the sheep skin rugs at first but they are nice to stand on when changing nappies (diapers) or when peaking in on the babies at night. Putting up the wall stickers will always be a nice memory for me, Mark and I cleverly waited until Calum went to sleep one hot night and I did my best to help waddling around with the step ladder and laying out what seemed like impossible patterns on the floor for Mark to put up as we talked about how different our lives would become when not one but two more babies entered them.
The quote on the wall (came out not so great in pictures), sums it up:
"Hearts entwined,
Twenty fingers, twenty toes....
Two sweet babies with cheeks of rose
Born on the same day, two gifts from above
Lives entwined, two babies to love." 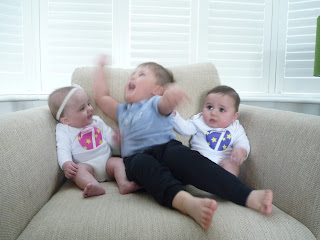 I think this picture pretty much says it all.... 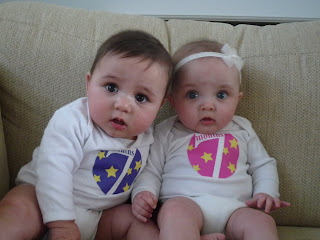 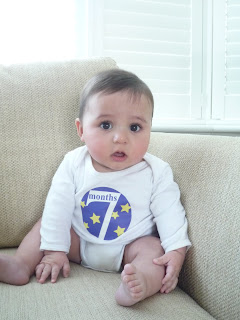 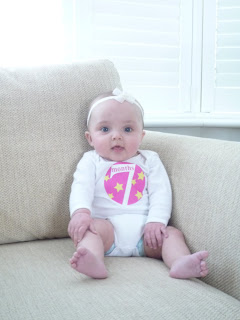 The babies were 7 months old yesterday, the last few weeks have made me feel more like a Mom of twins then ever before with the introduction of solid foods which makes for a lot more work and a lot less time on my hands. It's been a bit of a challenge, Evan went from being my power sleeper to all of the sudden waking again in the night to feed which has got me confused as the two of them are eating almost every two hours...

Looking at Sienna today I feel as if she has literally grown overnight and I remembered again what the sonographer said at my last scan about her being the longer, leaner one and Evan being more stocky and compact. They really couldn't look more different, nothing like twins and barely even like siblings! In this last week I've had lots of comments from strangers and friends and family about just how similar Evan looks to Calum.

Calum continues to dote on his sister, starting every morning by running in to say good morning to Sienna and to give her a "big kiss" (read: smash his face into hers and drool all over her face...). Evan is definitely more the observer, watching Sienna and Calum be loud and crazy and waiting to decide if he wants to join in. As loud as Sienna can be, she is so chilled out and such an easy baby, very rarely crying and making things with two boys much easier on her Mom. Evan is the handsome one, getting lots of attention wherever we go and learning to be as charming as his Daddy. x 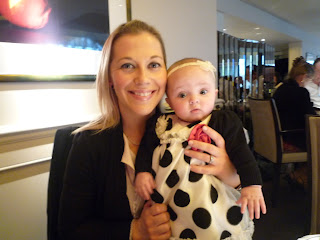 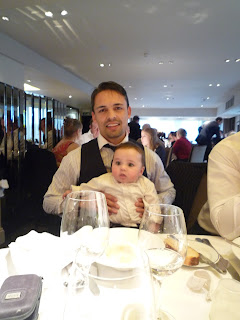 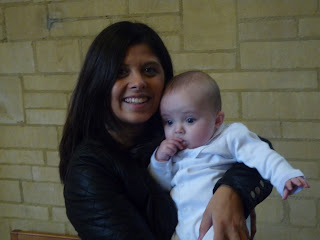 Sienna and one of her godparents, Tracey 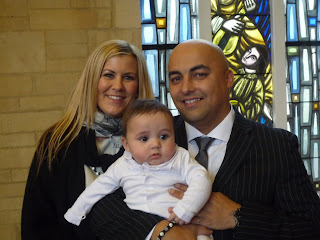 Evan and his godparents, Paul and Rachel 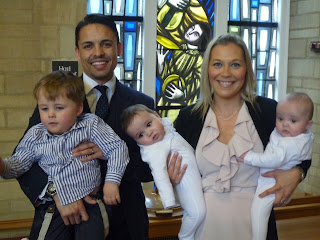 Our crazy family (still working on my twin hold!)

Yesterday was the twins' baptism, a special day not only for them but of course for us, too. Was a a bit reminiscent of my own baptism almost a year ago when I became Catholic and nice for me to be able to appreciate the symbolism and meaning which I probably didn't fully understand when Calum was baptised a couple of years ago.

The ceremony itself went off as well as we could have hoped, with Calum chasing his cousin Max around the pews for most of it and our Father only appearing slightly annoyed that we weren't following as well as we should have, but we survived and it was a very special day.

Thanks so much to Mark's family for making it so lovely; thoughts were with Auntie Dett who is Sienna's godmother, an amazing role model not only religiously but in all areas of life but who was there only in spirit since she's in LA. Feel pretty lucky to have these two in my life and such a great family unit, only wish the rest of my family could have been there, too. x 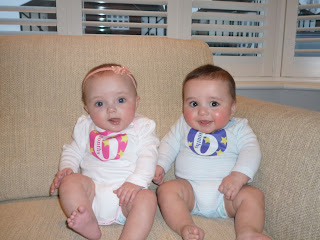 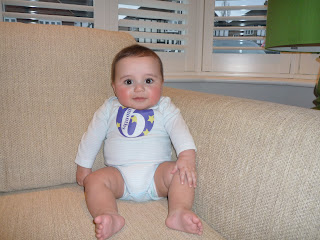 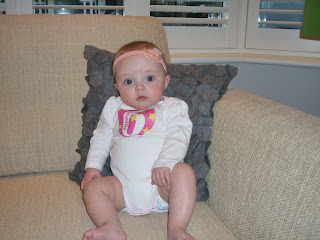 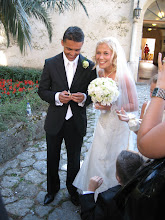 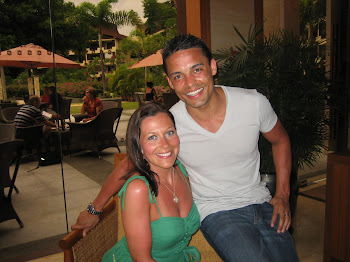 Jen
London, United Kingdom
I moved from Seattle to London in June 2006 to follow my dreams, on Sept. 28, 2007 I married Mark. Calum Xavier came into our lives on April 24, 2009 and by mid-September 2011 we will welcome two more to our family, boy/girl twins. This blog helps us keep our loved ones in the U.S. up to date with what's going on here in the U.K. with the Verghese family.